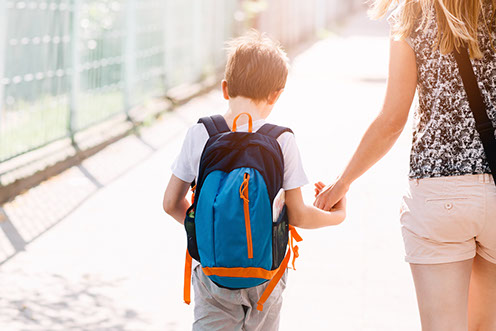 When I first went off to kindergarten, I remember the excitement in seeing new and old friends from the neighborhood, meeting my teacher and getting to do new activities. Aside from the bottle of Champagne on the counter, I don’t remember anything my parents did to prepare me for that day. Only after watching my own daughters head off to preschool for the first time did I realize everything we had done to prepare them for being on their own.

The most important task is building independence, both socially and developmentally. Babies start to push boundaries and investigate their world from the moment they crawl away from their mother. As infants and toddlers, we allowed our girls to explore and test their strength. They realized, with our support, they could venture out and experience the world.

The biggest developmental advancement happens at about age two, when children start to seek separation from their parents. There is a fine line between keeping children safe and letting them experience the world for what it is. Adverse situations arose, and problems needed to be solved. Our daughters were able to gain independence by overcoming most obstacles themselves. But more importantly, they became eager to encounter new ones.

Gaining independence can be thwarted with the “little things.” Children need to develop the fine motor control and coordination to button a shirt, tie a shoe, or buckle a belt. Giving them shoes with Velcro, for instance, allows them the ability to put on shoes without your help. Similarly, it helps to buy skirts and pants with elastic waistbands that form fit without needing zippers and snaps to be manipulated.

By three, most children realize that older kids and adults are using the bathroom without help, and they want to do that too. Helping them achieve this milestone can give them full mastery of their bodies, and provide a huge boost of confidence. However, children have to make the leap themselves. As much as we’d like to, we can’t make a child potty train, only help them want to. There are several techniques, such as using an older child to model and mentor, which can help motivate a child to train. Most preschools require a child to be mostly potty trained before they will be accepted. Despite this, please resist informing your child of this. The added pressure can backfire badly, causing shame when the child is not able to meet the deadline.

Social development was equally important. Stranger anxiety was the rule until about two, and until three they were really not willing to play with or share toys with others. We made it a point to introduce them to children their age so they could learn how to interact and be with others. Over the next couple years, they learned social rules dictated by children. The children enforced these rules themselves, with good behavior rewarded by attention, and bad behavior by exclusion or a swift slap to the head.

We felt secure that our children would do well at preschool because they were forearmed with a sense of self, the ability to solve their own problems and knowledge of how to function socially in the world of children.

Even with these tools, there is still an inherent fear of the unknown. Allowing children to transition into new surroundings slowly and with trusted people nearby greatly improves their acceptance of the new school. For example, Rappahannock County has a program called “Jump Start” that has an open-school day, where up-and-coming kindergarteners are allowed to see the classroom, meet the teacher, play with the toys and sit in a real desk. They can meet some of their fellow classmates, too. That way, when they arrive on the first day of school, they know where they are going and there are familiar faces to greet them.

Interestingly, one of the least important steps that most parents focus on is early academic development. Of course it is important to work with children on language skills, reading books early and often, and speaking to your child as you’d like to be spoken to. Helping children to achieve intellectual milestones, such as using the toilet, tying shoes, and getting dressed properly helps to bolster their sense of independence.

I’m often asked what the “best” preschool is, or how to boost brainpower and intellectual ability. Studies have compared children who were given a rigorous and intellectually stimulating preschool experience with those who were in a normal daycare setting. When both attended the same elementary school, any advantage gained from the preschool had been washed away by second grade. While home environment, ongoing intellectual stimulation and genetics of course play large parts in a child’s development, the studies show that picking the “right” preschool is not that critical in your child’s overall success.

Having a child start school can fill a parent with worry and concern. However, if a good sense of independence and desire for discovery have been instilled, and there is acceptance of new things or familiarity with what is to come, the worst thing to fear is that your child will be so excited to get to school that they forget to give you a hug before running up the path.